This is my sister Adele, after living in Perth for 3year she moved home in November 2012, I remember thinking to myself how do I tell her I’m concerned about her weight? Now this had nothing to do with looks this was concern for her health and considering a part of my job as a Trainer is to guide people through their weight loss I had no idea how to tell someone without hurting them that it was it was time to start?

It wasn?t until the picture on the left taken May 2013 that I finally had the courage to tell her I was scared for her health and I really wanted her to let me help her, to my surprise with a few tears each she didn?t even argue, arriving the next morning to weigh in and do her first session in the gym. The picture on the right was taken January 2014 (regretfully i couldn?t be at this function), Adele is currently 16kg lighter and living a whole new lifestyle. She no longer needs to follow the meal plan or exercise programs I wrote for her in the beginning she is doing well on her own, she even runs with me, completing a 4km run in November 2013 as I ran my first Half Marathon, but that?s another story.

I won?t take all the credit for Adele’s success because without her devotion to her health she would still be unwilling to take photos next to her sisters before family events, but I do know that the way I trained her in eating and exercise has not just made her a yo-yo dieter she is now a healthier person still on a mission to lose weight and be healthy, this was also made all the more possible with the support of our family who Adele still lives with, all followed the meal plans and all benefited somewhat from it.

Through this Adele also opened my eyes, that it was time to start my Nutrition studies which I had been procrastinating for over 12months which will allow me to write meal plans for all my clients not just family members. I am currently well underway to completing the first level of my Nutrition, which is another incredibly exciting step for 2014, I’m starting to feel like 2014 is going to be a huge year and I haven’t even touch on my New Years resolution yet!

So look at this picture and know that when you make the change it’s always possible.

Ready to Transform Your Body?

Get Started for Just $89 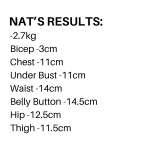 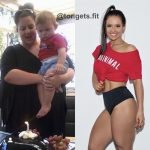 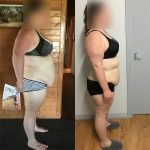 Simply signup to my newsletter and receive a downloadable Training Program